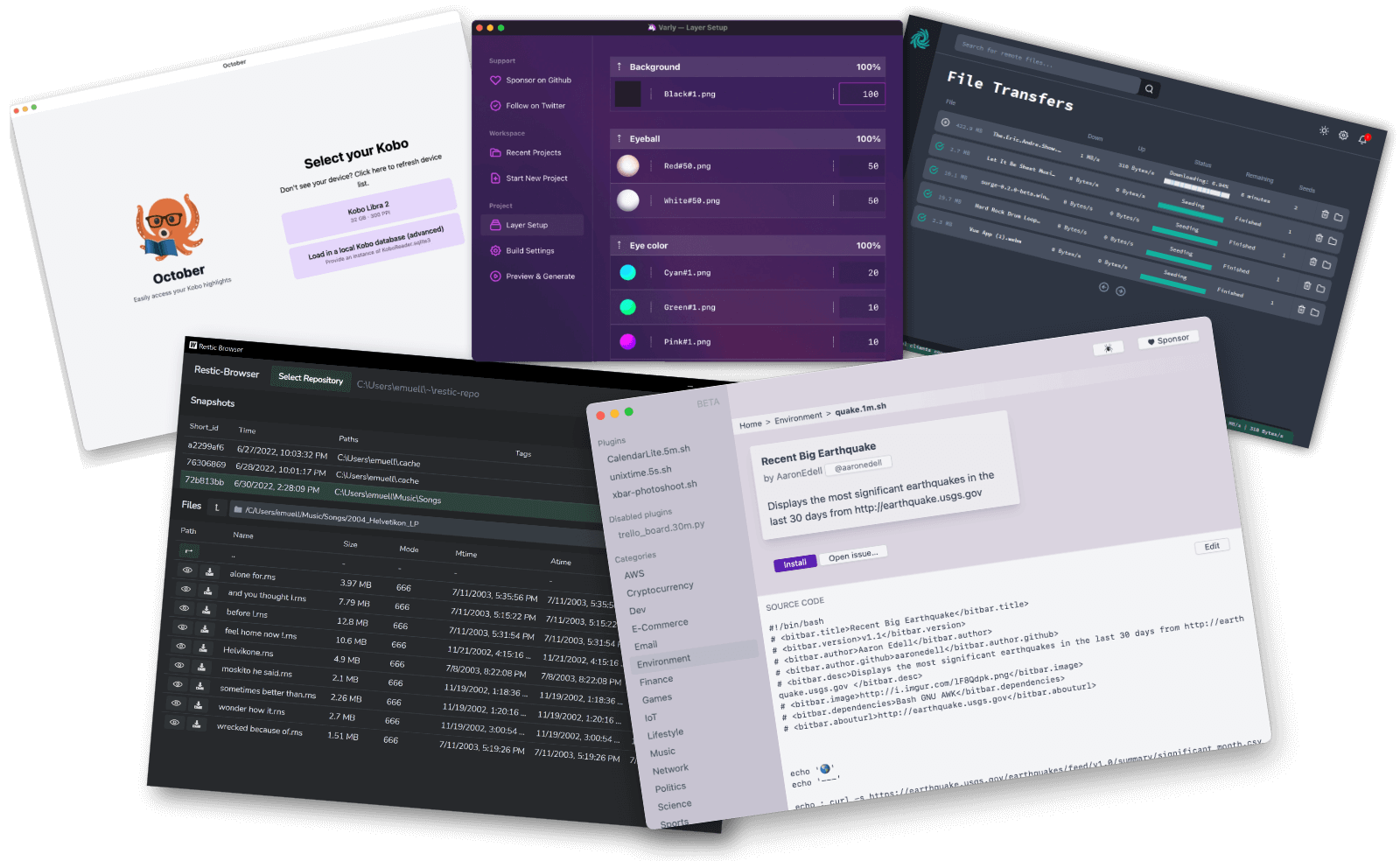 Today marks the release of Wails v2. It's been about 18 months since the first v2 alpha and about a year from the first beta release. I'm truly grateful to everyone involved in the evolution of the project.

Part of the reason it took that long was due to wanting to get to some definition of completeness before officially calling it v2. The truth is, there's never a perfect time to tag a release - there's always outstanding issues or "just one more" feature to squeeze in. What tagging an imperfect major release does do, however, is to provide a bit of stability for users of the project, as well as a bit of a reset for the developers.

This release is more than I'd ever expected it to be. I hope it gives you as much pleasure as it has given us to develop it.

If you are unfamiliar with Wails, it is a project that enables Go programmers to provide rich frontends for their Go programs using familiar web technologies. It's a lightweight, Go alternative to Electron. Much more information can be found on the official site.

The v2 release is a huge leap forward for the project, addressing many of the pain points of v1. If you have not read any of the blog posts on the Beta releases for macOS, Windows or Linux, then I encourage you to do so as it covers all the major changes in more detail. In summary:

Getting to v2 has been a huge effort. There have been ~2.2K commits by 89 contributors between the initial alpha and the release today, and many, many more that have provided translations, testing, feedback and help on the discussion forums as well as the issue tracker. I'm so unbelievably grateful to each one of you. I'd also like to give an extra special thank you to all the project sponsors who have provided guidance, advice and feedback. Everything you do is hugely appreciated.

There are a few people I'd like to give special mention to:

Firstly, a huge thank you to @stffabi who has provided so many contributions which we all benefit from, as well as providing a lot of support on many issues. He has provided some key features such as the external dev server support which transformed our dev mode offering by allowing us to hook into Vite's superpowers. It's fair to say that Wails v2 would be a far less exciting release without his incredible contributions. Thank you so much @stffabi!

I'd also like to give a huge shout-out to @misitebao who has tirelessly been maintaining the website, as well as providing Chinese translations, managing Crowdin and helping new translators get up to speed. This is a hugely important task, and I'm extremely grateful for all the time and effort put into this! You rock!

Last, but not least, a huge thank you to Mat Ryer who has provided advice and support during the development of v2. Writing xBar together using an early Alpha of v2 was helpful in shaping the direction of v2, as well as give me an understanding of some design flaws in the early releases. I'm happy to announce that as of today, we will start to port xBar to Wails v2, and it will become the flagship application for the project. Cheers Mat!

There are a number of lessons learnt in getting to v2 that will shape development moving forward.

In the course of developing v2, there were many features and bug fixes that were developed on an ad-hoc basis. This led to longer release cycles and were harder to debug. Moving forward, we are going to create releases more often that will include a reduced number of features. A release will involve updates to documentation as well as thorough testing. Hopefully, these smaller, quicker, focussed releases will lead to fewer regressions and better quality documentation.

When starting this project, I wanted to immediately help everyone who had a problem. Issues were "personal" and I wanted them resolved as quickly as possible. This is unsustainable and ultimately works against the longevity of the project. Moving forward, I will be giving more space for people to get involved in answering questions and triaging issues. It would be good to get some tooling to help with this so if you have any suggestions, please join in the discussion here.

Learning to say No​

The more people that engage with an Open Source project, the more requests there will be for additional features that may or may not be useful to the majority of people. These features will take an initial amount of time to develop and debug, and incur an ongoing maintenance cost from that point on. I myself am the most guilty of this, often wanting to "boil the sea" rather than provide the minimum viable feature. Moving forward, we will need to say "No" a bit more to adding core features and focus our energies on a way to empower developers to provide that functionality themselves. We are looking seriously into plugins for this scenario. This will allow anyone to extend the project as they see fit, as well as providing an easy way to contribute towards the project.

Looking to the Future

There are so many core features we are looking at to add to Wails in the next major development cycle already. The roadmap is full of interesting ideas, and I'm keen to start work on them. One of the big asks has been for multiple window support. It's a tricky one and to do it right, and we may need to look at providing an alternative API, as the current one was not designed with this in mind. Based on some preliminary ideas and feedback, I think you'll like where we're looking to go with it.

I'm personally very excited at the prospect of getting Wails apps running on mobile. We already have a demo project showing that it is possible to run a Wails app on Android, so I'm really keen to explore where we can go with this!

A final point I'd like to raise is that of feature parity. It has long been a core principle that we wouldn't add anything to the project without there being full cross-platform support for it. Whilst this has proven to be (mainly) achievable so far, it has really held the project back in releasing new features. Moving forward, we will be adopting a slightly different approach: any new feature that cannot be immediately released for all platforms will be released under an experimental configuration or API. This allows early adopters on certain platforms to try the feature and provide feedback that will feed into the final design of the feature. This, of course, means that there are no guarantees of API stability until it is fully supported by all the platforms it can be supported on, but at least it will unblock development.

I'm really proud of what we've been able to achieve with the V2 release. It's amazing to see what people have already been able to build using the beta releases so far. Quality applications like Varly, Surge and October. I encourage you to check them out.

This release was achieved through the hard work of many contributors. Whilst it is free to download and use, it has not come about through zero cost. Make no mistakes, this project has come at considerable cost. It has not only been my time and the time of each and every contributor, but also the cost of absence from friends and families of each of those people too. That's why I'm extremely grateful for every second that has been dedicated to making this project happen. The more contributors we have, the more this effort can be spread out and the more we can achieve together. I'd like to encourage you all to pick one thing that you can contribute, whether it is confirming someone's bug, suggesting a fix, making a documentation change or helping out someone who needs it. All of these small things have such a huge impact! It would be so awesome if you too were part of the story in getting to v3.

PS: If you or your company find Wails useful, please consider sponsoring the project. Thanks!